Journey to Berlin and Prague

nCruise the Elbe, one of Western Europe’s most important rivers as it weaves its way through the former Kingdom of Bohemia. Experience the many sides of Berlin before setting sail for the legendary German towns of Magdeburg, Dresden, and Wittenberg, Dr. Martin Luther’s hometown. Colour, culture, and old-world sophistication await you in Prague, Czech Republic. 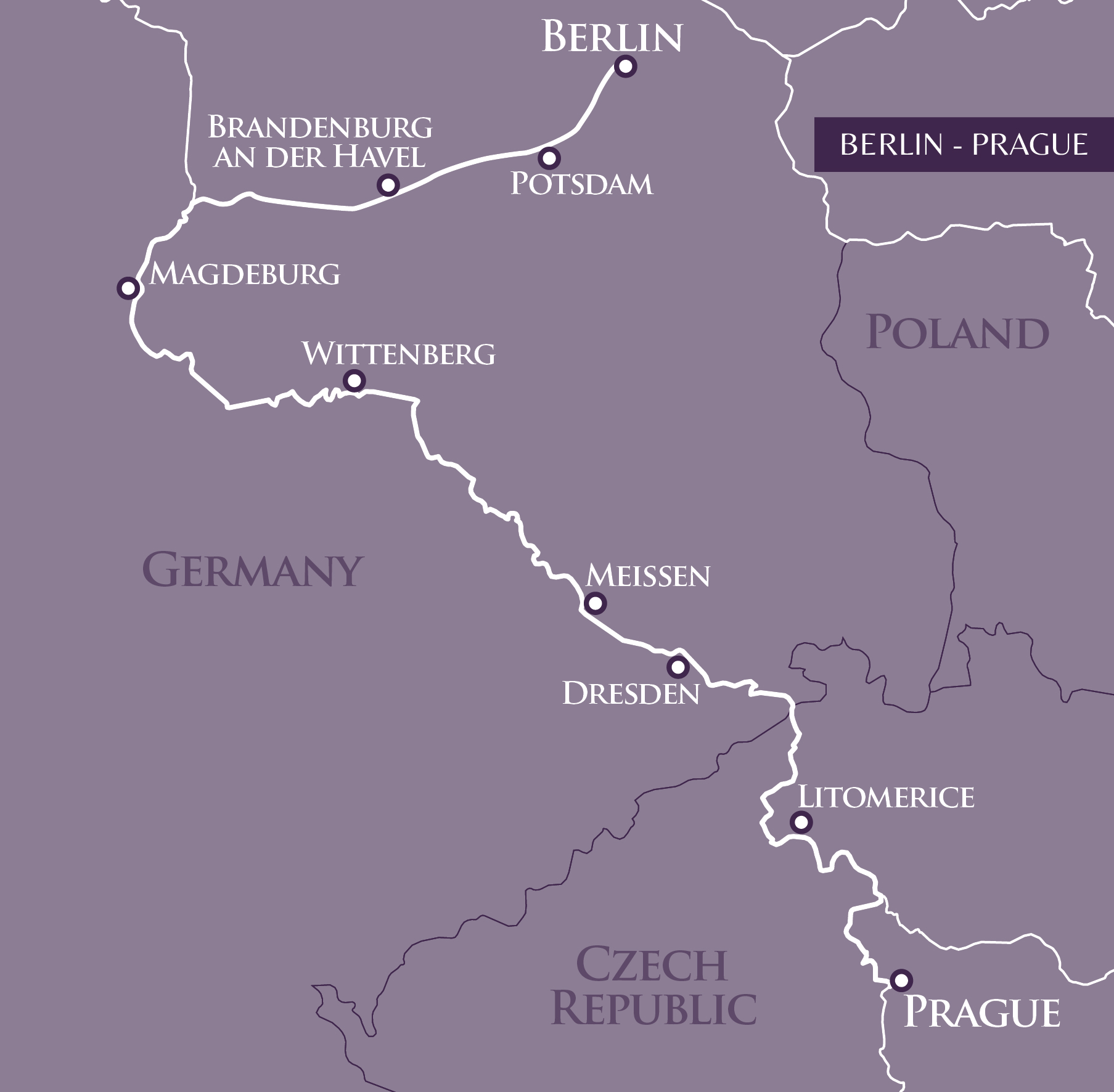 Note: This program is also available in the opposite direction.

Embark on an unforgettable journey in Berlin—embark in the evening and settle into your cabin. Enjoy a cocktail in the lounge as we present the crew. Dinner is served on board.

This morning, board a coach to explore the fascinating German capital of Berlin, a city known for its museums, monuments, and chic bars and restaurants. Berlin has been a hub for artists, musicians, and philosophers for hundreds of years, and in the 20th century alone, it’s seen a revolution, Nazi leadership, bombing, division, and at last, reunification when the Berlin was at last brought down. You’ll see famous monuments, including the Victory Column, the Bismarck Memorial, Brandenburg Gate, and the Reichstag building, with its glass dome. Explore Museum Island, and see Checkpoint Charlie, the former crossing point between East and West Berlin.

As you cruise towards Burg in the morning, take the opportunity to enjoy the gentle pace of the river and take in the pastoral landscapes. Upon arrival, you may choose to embark on an excursion to Magdeburg, a midway point on the Elbe River. Here, see the Cathedral of Saints Catherine and Maurice, which houses the tomb of Emperor Otto I the Great. The oldest Gothic cathedral in the country, it also features the tallest steeple in eastern Germany.

Today, you’re invited to follow a guide in the hometown of Protestant Reformer Dr. Martin Luther. See the door of the church where Luther nailed his 95 Theses and sparked the Protestant Reformation and tour Luther’s home, a former Augustinian monastery which has since been listed as a UNESCO World Heritage Site. The city centre features charming Renaissance-style houses.

Meissen is famous for manufacturing porcelain, a 300-year-old industry boosted by abundant local deposits of potter’s clay and china clay. On an excursion to the city, tour the porcelain factory and see the magnificent pieces in the museum. Next, head to the historical district. Here, the striking Late Gothic-style Albrechtsburg castle sits adjacent to the Meissen Cathedral, overlooking the Elbe.

Spend the morning cruising to Bad Schandau. Upon arrival, embark on an adventure to the Elbe Sandstone Mountains, where the Königstein Fortress sits perched atop a hill overlooking the river. The fortress is believed to have been built in the 13th century, and for centuries, it was used as a state prison.

At the confluence of the Elbe and the Ohre rivers, Litomerice, Czech Republic is one of the oldest Bohemian cities, established on the site of a former Slavic fort. The city’s vast historic centre boasts multi-coloured Gothic, Baroque, and Renaissance buildings which leave an impression on visitors.

Today, experience the rich culture and distinctive architecture of Prague, the current capital and largest city of the Czech Republic. Set off on foot in the Old City and let yourself fall in love with the regal Old Town Square and its Gothic- and Baroque-style architecture, including Kinsky, a Rococo palace-turned-art museum, and the Church of Our Lady before Tyn, a Gothic cathedral with dark spires that pierce the Prague skyline. As you continue on, see the elegant, Art Nouveau-style Municipal House and the Powder Tower, which dates back to the 11th century. Finally, explore the Jewish Quarter, with a long history back to the 13th century which remains a testament to the Jews in Prague. Don’t miss the memorial statue for author Franz Kafka.

Savour breakfast on board the ship before saying farewell and disembarking in the morning.

* Price per person based on double occupancy. Due to the dynamic nature of availability and pricing, please click here to contact us directly for sailing schedule and full pricing |

The MS Elbe Princesse I is built in 2016. CroisiEurope drew inspiration from days past to build a unique, hi-tech ship for cruising the Elbe, which is inspired by an ancient technique – the paddle wheel.